Sometimes you just need a blow dryer. The Instyler Blu turbo ionic dryer is a decent hair dryer that has a few pretty interesting features. We wanted to know if this hair dryer is as good as it says, so we tested it out. In this review we’ll tell you all the information we found on the Instyler Blu hair dryer and explain why we gave it a rating of 2.9 stars out of five. First let’s start with some pros and cons of the hair dryer.

When it comes to features, the Instyler has the same basic features as most other ionic hair dryers. Rather than adding a bunch of extra features, Instyler decided to simply upgrade the regular features so they’ll have something a little “extra” about them. Here are the few features of the Instyler Blu Turbo dryer.

Having options is always great, so being able to choose between a low flow of ions and a high flow of ions can be the difference between a good hair day and a bad one. This option is great for people who like to switch between a sleek, straight hairstyle and then a more volumized look because you can do both with the same hair dryer.

Instead of a mere high and low setting for speed/air flow, the blow dryer has a dial that allows you to customize the airflow at more than two levels. This is especially good to pair with the ions selection so that you can truly tailor your experience.

Is The Instyler Blu Turbo Hairdryer Any Good?

We rated the Instyler Blu  2.9 out of five stars based on certain criteria. First, we rated each individual criteria, then we took an overall rating from the average of them all. Below are the criteria we used plus short explanations of why we gave them a specific rating.

Ease of Use – 5
The hair dryer is very easy to use with simple controls.

Durability – 2
This hair dryer is made from cheap parts. The construction is shoddy and it almost comes off like a child’s toy.

Heat Output – 3
The high and low settings are more like medium and low.

Price – 1
This hair dryer is more like one of the $30 hair dryers you’d find at the local hair store.

Options (settings) – 4
We’ll give the hair dryer credit for the infinity air flow dial. It’s a neat feature to have on a hair dryer.

How Does the Instyler Stack Up?

Besides being ceramic ionic hair dryers, these two hair dryers are very different. They both have pros and cons compared to the other. The Conair Infiniti Pro has a four-year warranty while the Instyler Blu Turbo only has a one year warranty. This can make you lean heavily towards the Conair, but then you have to consider that the Conair only has a five-foot long power cord while the Instyler has a nine-foot cord.

The Conair has an ergonomic handle and the Instyler doesn’t, but on the other hand, the Instyler is very lightweight while the Conair is heavy–twice the weight of the Instyler. Another point to consider–the Instyler only has 1500 watts compared to the 1875 watts that the Conair has, but the Instyler has a jet turbine fan and an aerospace designed airflow system which makes it seem like it has up to 2000 watts of power. Both hair dryers have something that the other is missing, in this sense, they stack up pretty evenly. However, price could be the deciding factor because the Instyler tends to cost twice as much as the Conair.

Before even getting into a comparison, it’s important to note that the Harry Josh Pro Tools Pro Dryer 2000 is actually a Valecta Paramount TGR4000 hair dryer that’s been painted green and had a private label slapped on it. We aren’t joking–it’s literally the exact same hair dryer manufactured by the exact same company. The price of a Harry Josh hair dryer is double the price of the Valecta simply because they’ve put a celebrity name on it. What we’re trying to say is, don’t buy the Harry Josh hair dryer unless you’re just a fan who wants to show support. Save money and get the Valecta.

For the purposes of this comparison, we will still use the Harry Josh name. The Harry Josh Pro 2000 is slightly different than the Instyler, mostly in the fact that it’s a higher quality hair dryer. It has 2 heat settings, 2 speed settings, and on and off ion settings and has a dual filtration system that reduces energy usage by up to 70 percent. You can turn the ions on or off for a sleek look or a volumized look. It has higher watts, 1875, and a more powerful motor making it great for any hair type. The Instyler can’t compete with any of these qualities. If you had to choose between these two, we’d recommend the Harry Josh (but get the Velecta version).

We can easily say with certainty that there really is no comparison with these two hair dryers. The Instyler, with it’s aerospace motor and lightweight, still can’t come close to Dyson’s Supersonic hair dryer. Dyson has essentially created their own dryer technology with a digital motor and Air Multiplier technology. Known for quality, elegance, and craftsmanship, Dyson always brings their A game with any of their products.

The one area that Instyler Blu Turbo wins in is price. The Dyson Supersonic is expensive. Although it’s worth every dollar, not everyone can splurge hundreds of dollars on a hair dryer. If you’re on a more modest budget, the Instyler would be the better choice.

After reviewing the Instyler Blu Turbo Ionic dryer, we’ve come to the conclusion that it’s not the best hair dryer, especially for the average retail price it’s offered at. Even with the aerospace technology and 1500 watts, it simply doesn’t produce the power or the heat needed to get salon-quality hair. However, it’s not the worst on the market and could even be tolerable if the price were reduced to half of what it is. It would then become a great budget choice. Right now, we would recommend the Conair Infiniti Pro hair dryer if you’re looking for an inexpensive ionic hair dryer. 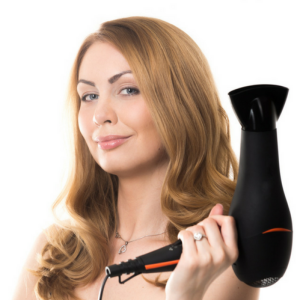 My name is Carrie and I have always had a hard time finding a great blow dryer. My hair always ended up damp like a Florida swamp or crispy like the Arizona desert. This led me and a loyal group of friends to test every hair dryer that we could get our hands on. This site is the result of that journey. Let me know what you think!

How Hot Does a Hairdryer Get?

Nume Signature Blow Dryer Review: Is It As Good As It Looks?

Important Disclaimer: The information contained on Hairy Carrie is intended for informational and educational purposes only. Any statements made on this website have not been evaluated by the FDA and any information or products discussed are not intended to diagnose, cure, treat or prevent any disease or illness. Please consult a healthcare practitioner before making changes to your diet or taking supplements that may interfere with medications.

Hairy Carrie is a participant in the Amazon Services LLC Associates Program, an affiliate advertising program designed to provide a means for us to earn fees by linking to Amazon.com and affiliated sites

Scroll to Top
We use cookies for various purposes including analytics and personalized marketing. By continuing to use the service, you agree to our use of cookies.